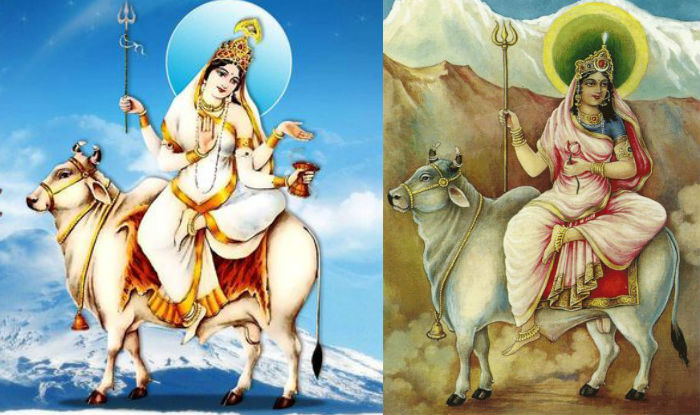 Sharad Navaratri 2017 commences on Thursday, September 21. One of the most popular Hindu festivals, Navratri is celebrated to honour Goddess Durga in her nine avatars. The first day of Navratri is dedicated to Devi Shailaputri, the first form of Maa Shakti also known as Navdurga. Born as the daughter of Himalaya, Shailaputri literally means daughter (putri) of the mountain (shaila). She is the consort of Lord Shiva and mother of Ganesha and Kartikeya. Navratri celebrations begin with the devotees worshipping Maa Shailputri after doing Ghatasthapana Puja. Navratri Colours 2017 With Dates: 9 Different Coloured Dresses to Wear Each Day.

Devi Shailputri is also known as Sati, Bhavani, Parvati or Hemavati. In her previous birth, as Sati, she was born to the vain and proud king, Daksha Prajapati who never accepted her decision of marrying Lord Shiva. According to Hindu mythology, Daksha organized a grand Yagna but did not invite Shiva. An angry and stubborn, Sati reached the site to question her father who further insulted Lord Shiva. Unable to tolerate the humiliation and insulting remarks against her husband, Sati immolated herself. She was reborn as Parvati in King of Mountains, Himalaya’s house and got married to Lord Shiva, this time with blessings from her father.

The first form amongst Navadurga, Goddess Shailputri is depicted having two hands – carrying Trishul (trident) in the right and a lotus flower in the left hand. She is seen mounting Nandi, a bull. Being the daughter of Himalaya, the entire world is granted strength from the Shailaputri aspect of Purna Prakriti Durga. She governs the moon, the provider of all fortunes. If an individual is troubled due to any bad effect of the moon, they must worship Devi Shailaputri to get rid of it. Her favourite flower is jasmine, which must be offered during puja. Devotees must also offer red coloured cloth piece to this form of Adi Shakti as well wear same coloured outfit while worshipping. They must chant this mantra to please Maa Shailputri – ॐ देवी शैलपुत्र्यै नमः॥ Om Devi Shailaputryai Namah.